Southern Voices is returning to the nave of Winchester Cathedral this month to perform this choral masterpiece with renowned period orchestra Florilegium. This promises to be an exciting and authentic performance with a smaller chamber choir and a superb orchestra. The concert is on Friday 23 March at 7.30.

Directed as usual by Katherine Dienes-Williams, the soloists consist of

Hope to see you there!

There remains an element of debate as to when the St Oswald Singers first started. The assumed start date was the Westbury roof appeal in 1985, but some founder members seem to think it was earlier. After that appalling name stuck (once uttered Peter Steer, there was no going back), the more marketable sobriquet Razor Sharp (thanks Barbie) enabled a more flexible approach to concerts. The strapline ‘Versicles, canticles and test pieces’ is also now part of the furniture.

The current and original members got back together in Westbury in October to raise money for the church again, complete with Wind in the Willows and lots of cake. We were also joined by the next generation of singers to help boost us in the second half.

Briefly shown also Sarah’s 50th party the day before to get us in the mood, and the now usual Advent gathering at Compton Greenfield.

Who knows where we will be (of if we will be) in 2045. Hopefully we might still be singing.

Wind in the Willows

George and the Dragon

Memories of choir visit to Braunschweig

I was fortunate enough to join a visit to the German city of Braunschweig with Southern Voices for an extended weekend of singing and making merry – and merry it was indeed.

The primary reason for the trip was to mark the 70th anniversary of the end of the second world war in Europe by performing a specially commissioned piece by German composer Jochen Moduβ, ‘Pro Pace’ (Mache mich zum Werkzeug deines Friedens – Make me an instrument of thy peace). Written for orchestra and separate choirs from Germany (main and children’s), Latvia, Poland and England, the whole weekend was extremely moving, with an emphasis very much on peace rather than victory. [It was notable that our hosts were not afraid of tackling historic issues head on – Bishop Christop Meyn spoke on Sunday and said, amongst other things – “Looking back, it is shocking to see how easily people lose their humanity in war, the speedy brutalisation by the war commanders leading to the war of annihilation against Russia and genocide of European Jews”.]

Each of the visiting choirs got to perform individually in the first half of the concert before getting together in the second half for the main event. Southern Voices performed an all English programme (from Byrd to Parry), chosen particularly to mark the occasion. The Cathedral choir from Posener, Poland, consisting of many robed choristers sang a variety of Polish music and the Latvian choir (in light brown and not-too-flattering robes) sang more contemporary Latvian music. We all came back together for a commemoration service on the Sunday, where we performed a Mendelssohn cantata (see the clip from YouTube).

Deep friendships were made and we look forward to a return visit from our German hosts. Although we have been abroad as a choir, this trip reminded me of a similar weekend in France whilst at University, with the University choir then singing with a French and Italian choir – amazing how music can bring people together than otherwise would simply not interact (or understand each other!).

To extend the weekend music-making some more, we visited the picturesque town of Goslar to perform an extended programme at one of the local churches, enhanced by some brilliant organ playing by our MD Katherine. In addition to the music, it was a great opportunity to see some of the local sights and sample some local fare, as well as reminding oneself what a great bunch of people sings in Southern Voices. 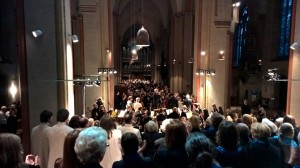 The end of the main concert

Getting to know the other choirs 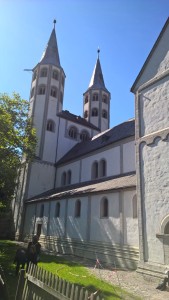 Venue for the Goslar concert

Let’s not forget the cake…

Taking place in the sublime quire at Winchester Cathedral as the sun sets, the programme consists of two Bach motets, Singet dem Herrn and Jesu, meine Freude. The concert starts with a Stravinsky mass with small orchestra (including three trombones!).

Tickets from the cathedral box office or buy on the night. 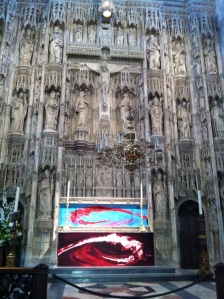 New altar frontal for the festival

26 years after we first got together, the rump of the St Oswald Singers got together for a very convivial afternoon of singing to help raise funds and awareness for Compton Greenfield Church just outside Bristol. Rather concerning was the need to get larger copies for the singers as our collective eyesight has deteriorated so much we could no longer read the original copies that had our names on. However, the notes seemed to flow and the passing of the years did nothing to dampen our enthusiasm for singing together. Well done Sarah!

If anyone can stand it, a couple of recordings were made (on an iPad, in the dark, with a slightly large cover). Amongst others, we sang Lobet Gott and My Evaline (click on the title to jump to YouTube; My Evaline takes a while to get going due to getting notes in advance for the next piece…). 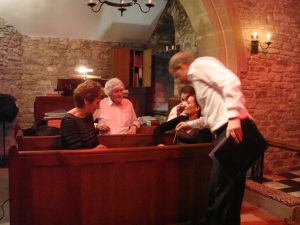 Did I leave my glasses here?

Audience gathering at start of concert

The St Matthew Passion took place in Winchester Cathedral on a balmy and calm Saturday night, 9 April. After much rehearsing and drilling from Charles (who must be the world’s leading authority on the work!), the performance seemed to hit all the right buttons – band, soloists and choir all coming together to create a wonderful event. The crit said the following:

Bach’s St. Matthew Passion is one of the greatest works of Western civilisation and a large audience in Winchester Cathedral was privileged to hear a complete team of musicians who clearly felt the same. Furthermore, they had the necessary artistry and commitment to communicate the power and profundity of the work in its entirety. Sung in German, and thus preserving Bach’s rhythmic intentions, the story unfolded with total drama and an instinctive feeling for language – a hallmark of the evening’s conductor, Charles Stewart, who had planned this epic presentation over many months. Non-German speakers still experienced the intensity of the human tragedy through the wonderfully nuanced singing of both soloists and forty-four members of Southern Voices. Supporting them was the period instrument section of the Southern Sinfonia, which always plays with alertness and enthusiasm in whatever styles are demanded of them.

Part 1 established the awesome credentials of Evangelist William Kendall, surely one of this country’s most practised, intelligent and fine-toned interpreters of Bach’s taxing recitatives. In the pulpit, fitting in age and dignity, was Hampshire Singer of the Year winner Jimmy Holliday as Jesus. He brought great power and realism to his accompanied recitatives as well as a thoughtful final aria in Part 2. Tenor Tim Lawrence and bass Marcus Farnsworth were equally compelling in their contributions and both used fine diction to reach across the great building. A frequent visitor to Cathedral programmes, Katharine Fuge produced consistently beautiful soprano tone and neat Baroque clarity. Newcomer mezzo soprano Clare Wilkinson has recorded the Passion and sang virtually all her music from memory with mesmerising effect on her listeners. Perhaps these two lighter female voices would have benefited from reduced orchestral strength in their solos but their engagement with the drama was never in doubt.

Part 2 saw the choir come into its own. It was first-rate before the Interval but as crowd choruses and eventual regretful humanity they were now totally credible and deeply moving by turns. This work articulates prejudice, greed, violence and social exclusion. If Charles Stewart’s directions were restrained and economical they still released a remarkably vivid retelling of this time-honoured yet ever relevant narrative. 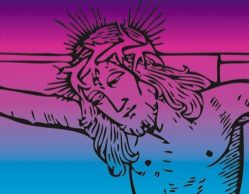 ** please note the early start time for this performance **

‘Music much greater than I had dreamed.’ That’s how Southern Voices’ musical director, Charles Stewart, describes the riches of Bach’s St Matthew Passion, which we will be performing with Southern Sinfonia and an outstanding line-up of soloists.

Our interpretation of this timeless masterpiece will be all the more authentic thanks to Charles’ intensive study of the work during a recent sabbatical. “In the autumn of last year I had the privilege of studying the Matthew Passion musically, theologically and culturally for a whole term,” he explains. “Bach lavished such meticulous care and sheer genius of musical invention on each movement of the Passion, matching music to text and giving his immense work shape, coherence and power. When my sabbatical started I thought I knew this music. By the time it ended I realised it is much greater than I had dreamed.”

Charles’ unique insight as musician and priest will be brought together in an informal pre-performance Study Day in Winchester on Saturday 5 March. The day will unlock many musical riches by exploring the impact and implications of words from St Matthew’s Gospel as seen through the sublime and dramatic music to which Bach sets them.

We hope you will be able to join us for both the Study Day and the performance. Booking is now open for both events but please note that Study Day tickets can only be purchased through the choir.

In preparation for our Easter concert we are holding a study day when our musical director Charles Stewart will explore the impact and implications of words from St Matthew’s Gospel as seen through the sublime and dramatic music to which Bach sets them.

Canon Stewart’s unique insight as both musician and priest will unlock many musical riches and is an ideal preparation for our performance of the St Matthew Passion on Saturday 9th April. It will also prove valuable for anyone seeking to deepen their knowledge of Bach’s work or further their keeping of Lent.