Southern Voices’ upcoming concert on Friday 6 November is called ‘Reflections’ noting the time of year and the choice of music. The programme consists of Maurice Duruflé’s Requiem and Frank Martin’s Mass for unaccompanied double choir.

Duruflé’s Requiem was published in 1947 by the French music publisher Durand. Commissioned in 1941 by the collaborationist Vichy regime, Duruflé was still working on the piece at the time of the regime’s collapse in 1944, and completed it in 1947, dedicating it to the memory of his father.

Frank Martin was a Swiss composer, who lived a large part of his life in the Netherlands. Of the mass it has been said *, “It was written back in 1922, well before Stravinsky’s Symphony of Psalms made it fashionable for French‐speaking composers to strike a monkish pose. It sounds like a Renaissance mass lost in time, aware nonetheless of long centuries passing and new horrors unfolding.” (Alex Ross, The Rest is Noise)

For the concert (this time on a Friday evening at 8.00pm) Southern Voices will be joined by Alexandra Stevenson (Mezzo-soprano) and Timothy Parsons (Organ). The concert will take place in Winchester Cathedral Quire. Tickets will be available from 28 September, online and from the Cathedral Box Office (01962 857275) priced £16 (concessions £14; children 17 and under £5). You can also contact me for tickets.

* It has also been said on this blog back in 2010, “Frank Martin completed his a cappella mass for double choir in 1926 yet the work did not receive its world premiere until the 1960s. A rich, exciting composition well suited to the acoustic of Winchester Cathedral Quire…” 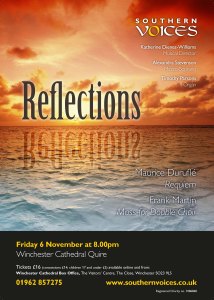 Southern Voices will be singing again in Winchester Cathedral on 13 November.

We are embarking on a European journey for our November concert, which will feature the music of four Swiss, French and Hungarian contemporaries.

Frank Martin completed his a cappella mass for double choir in 1926 yet the work did not receive its world premiere until the 1960s. A rich, exciting composition well suited to the acoustic of Winchester Cathedral Quire, guest conductor Simon Bell has paired Martin’s most famous choral work with charming motets by virtuosic French organist Marcel Dupré and the evocative Litanies à la Vierge noire, written by Francis Poulenc following the death of a friend and his pilgrimage to the Black Madonna of Rocamadour

Tickets £17.50
Concessions £14.50. Children 16 and under £5.
Available from the Cathedral box office  (booking fees and postage charges may apply)